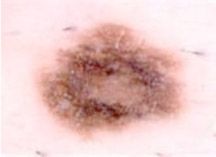 Dysplastic nevus also referred to as atypical nevus or Clark’s nevus, is an acquired mole that may appear as solitary or multiple lesions. They are significant in that someone with a dysplastic nevus is considered to have an increased lifetime risk for melanoma. Dysplastic nevi are seen in about 4% of the Caucasian population in the United States. Some families have large numbers of dysplastic nevi as well as histories of melanoma. These people must be observed closely because their lifetime risk for Melanoma can be quite high.

The most common technique to remembering the signs and symptoms of dysplastic nevus is the acronym ABCDE: