Pityriasis Rosea is a rash that can occur at any age but it is most common in the ages of 15 to 40 years of age. The rash can last anywhere from several weeks to several months, and usually disappears spontaneously. The rash often begins as a large pink scaly patch on the chest or the back. This patch has been called the “herald” or “mother” patch. Within a week or two, more pink patches, sometimes hundreds of them, appear on the body affecting the trunk and sparing sun-exposed areas. The patches are oval and often form a pattern over the back that resembles the outline of a Christmas tree. Some patients will experience some itching, especially when they become overheated.

The cause of this rash is unknown. It is not caused by a fungus (ringworm) nor bacteria. It is also not due to an allergy. It is not contagious. Many doctors believe that it is caused by a virus. 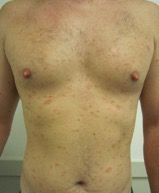 In most cases, therapy is not required as many patients are asymptomatic. However, Dr. Green will prescribe medications to decrease the associated itch as well as help speed up the time of the resolution of this rash. Usually, there are no permanent marks as a result of this rash.