Keratosis pilaris is a skin condition commonly seen on the upper arms, buttocks, and thighs. The skin cells that normally flake off as fine dust from the skin form plugs in the hair follicles. These appear as small pimples that have a dry ”sandpaper” feeling. They are usually white but sometimes rather red. They usually don’t itch or hurt.

Keratosis pilaris is particularly common in teenagers on the upper arms. It may occur in babies where it tends to be most obvious on the cheeks. It may remain for years but generally gradually disappears usually before age 30. Keratosis pilaris is unsightly but completely harmless. It is usually worse during the winter months or other times of low humidity when skin dries out, and may worsen during pregnancy or after childbirth. 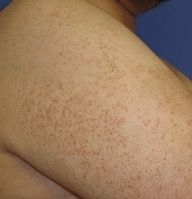 Treatment of keratosis pilaris is not necessary, and unfortunately often is difficult. With persistence, most people can get very satisfactory improvement. Initial treatment should be intensive moisturizing. Dr. Green prefers treatments using creams such as glycolic acid, lactic acid, or even retinol and having their patients re-apply the cream several times daily.

In addition to these treatment options, Dr. Green recommends removing the plugged pores by taking long, hot soaking baths and then exfoliating the areas with a coarse washcloth, stiff brush, scrubbing gloves, or ‘Buf-Puf’ using the specially formulated Lava Scrub.